Ultraviolet (UV) radiation is a carcinogen that causes skin cancer. UV exposure of cells leads to the generation of DNA lesions, such as pyrimidine dimers. These lesions can result in mutations that facilitate the malignant transformation of cells; therefore, the repair of these DNA lesions is critical for cancer prevention. In mammalian cells, nucleotide excision repair (NER) plays a critical role in repairing UV-induced DNA lesions.
MicroRNAs (miRNAs) are small non-coding RNAs that negatively regulate gene expression at the post-transcriptional level. MiRNAs have been implicated in DNA-damage response and repair. Interestingly, the expression of a subset of miRNAs is altered in response to UV, and depletion of proteins required for miRNA biogenesis leads to UV sensitivity. These findings suggest a functional connection between miRNA biogenesis and cellular UV response. However, the molecular mechanisms behind this connection are unknown.
DGCR8 is a key protein that regulates miRNA biogenesis. MiRNAs are transcribed within long primary transcripts (pri-miRNAs) that are cleaved by the Microprocessor complex consisting of Drosha (an RNase) and DGCR8 (an RNA binding protein) to release precursor miRNAs (pre-miRNAs). Pre-miRNAs are further processed by Dicer into mature miRNAs. However, it is unknown how DGCR8 is regulated in response to UV radiation. 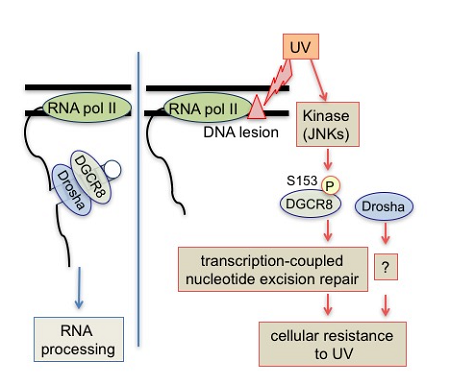 Recently, we found an unexpected role for DGCR8 in the repair of UV-induced DNA lesions. Treatment with UV induces phosphorylation on Serine 153 (S153) of DGCR8 in human and murine cells. JNKs are involved in the UV-induced S153 phosphorylation. S153 phosphorylation is critical for cellular resistance to UV, the removal of UV-induced DNA lesions, and the recovery of RNA synthesis after UV exposure, but not for microRNA expression. The RNA-binding and Drosha-binding activities of DGCR8 are not critical for UV resistance. These findings suggest that DGCR8 has two independent functions; miRNA biogenesis and UV resistance.
DGCR8 depletion is epistatic to defects in XPA, CSA and CSB for UV sensitivity. DGCR8 physically interacts with CSB and RNA polymerase II. Thus, UV-induced S153 phosphorylation mediates transcription-coupled nucleotide excision repair of UV-induced DNA lesions in a manner independent of microRNA processing. Taken together, these findings indicate the existence of a novel cellular signaling pathway that connects the miRNA biogenesis machinery, UV-induced DNA damage and DNA repair (“DGCR8-mediated UV-response pathway”).

Currently, we are trying to elucidate the mechanism by which DGCR8 regulates transcription coupled-nucleotide excision repair. We are trying to identify the phosphatases and kinases that regulate S153 phosphorylation.