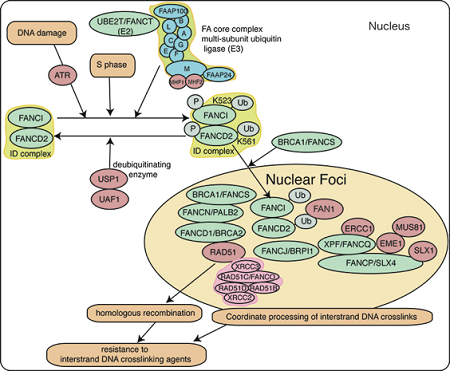 Fanconi anemia (FA) is a cancer-prone genetic disease characterized by genomic instability and cellular hypersensitivity to interstrand DNA crosslinking agents, such as cisplatin and mitomycin C. FA is comprised of at least 22 complementation groups (FA-A, B, C, D1, D2, E, F, G, I, J, L, M, N, O, P, Q, R, S, T, U, V and W). All of the 22 FA genes (FANCA, B, C, D1 (BRCA2), D2, E, F, G, I, J (BACH1/BRIP1), L, M, N (PALB2), O (RAD51C), P (SLX4), Q (XPF), R (RAD51), S (BRCA1), T (UBE2T), U (XRCC2),  V (REV7/MAD2L2) and W (RFWD3)) have been identified. These FA-BRCA proteins cooperate in a common pathway required for cellular resistance to interstrand crosslinking agents, and this pathway is now called “the FA-BRCA pathway.”
The key event in the activation of the FA-BRCA pathway is the monoubiquitination of FANCD2. FANCD2 and FANCI form a protein complex called the ID complex. Eight FA proteins (A, B, C, E, F, G, L and M) are components of a multi-subunit ubiquitin ligase complex (FA core complex) that monoubiquitinates both FANCD2 and FANCI.
The FA-BRCA pathway gets activated in response to DNA damage resulting in monoubiquitination of FANCD2/FANCI complex and its targeting to BRCA1/BRCA2/RAD51-containing nuclear foci at the sites of DNA damage. This process requires the FA core complex, BRCA1 and ATR, a DNA damage signaling kinase. Monoubiquitinated FANCD2 recruits downstream nucleases to sites of DNA repair. BRCA1, BRCA2 and RAD51 are required for efficient homologous recombination. These factors are also involved in replication fork protection. After ionizing radiation (IR) exposure, FANCD2 is directly phosphorylated by another DNA damage signaling kinase called ATM, and this phosphorylation is required for the establishment of IR-inducible S-phase checkpoint. Thus, the FA-BRCA pathway is a DNA damage-activated signaling pathway which controls DNA repair and cell cycle checkpoint.
Interestingly, the FA-BRCA pathway is inactivated in a wide variety of human cancers: ovarian, breast, non-small cell lung, cervical, and head and neck squamous cell cancers. Inactivation of the pathway leads to genomic instability, which promotes malignant transformation of cells. In the meantime, inactivation of the pathway can also cause cisplatin sensitivity in cancer cells, suggesting a broad and important role of the pathway in human carcinogenesis and chemosensitivity of human cancer.

Fanconi anemia is a rare disease: 1 in million or 5 in million. That rare. Then, why are we studying such a rare disease?
First, this is a devastating disease, and patients with FA and family of the patients are waiting for the progress in the understanding of the disease and for improvement of therapy.
Second, Fanconi anemia is a disease with cancer susceptibility. Studying rare genetic diseases with cancer susceptibility has been a productive way to get insights into pathogenesis of cancer in the general population. For example, mutations in p53, Rb, and ATM genes are responsible for the genetic diseases, Li-Fraumeni syndrome, familial retinoblastoma, and ataxia telangiectasia, respectively. p53, and Rb turned out to be important tumor suppressor genes in cancer in the general population. ATM turned out to be a critical kinase for the activation of DNA damage response. Similarly, understanding Fanconi anemia genes has greatly enhanced our knowledge of the pathogenesis and progression of human cancers.